In case you're worried about outrage withdrawal…

…after Biden takes office, just remember we may never run out of Trumps.

The guy at the grocery store…

…told me he picked up a new book about anti-gravity and couldn't put it down,

Here's a sentence from an Associated Press story about the COVID-19 vaccination program this morning:

"Unlikely" signals the writer's assumption that West Virginia is a less than fully successful (backward) state—which may be your assumption too. Or mine.

But "emerged as a success" would serve just as well in a news story (not as fashionably edgy but clearly just as accurate), avoiding a lazy stereotype.

There's a lot of talk these days about "news literacy" as an attempt to counter disinformation, which is a good thing. But news literacy means skeptical reading not only of things you find questionable, but things you take for granted as well.

Posted by Ted Compton at 6:18 AM No comments:

Man stole tow truck, then called 911 to complain because victim pulled a gun on him, prosecutors say

Posted by Ted Compton at 6:39 AM No comments:

The 432-year-old manual on social distancing

Angelerio instructed that – as translated by Benedictow's team – "People allowed to go out must bear with them a cane measuring six feet long. It is mandatory that people keep this distance from one another."

So it's not just Fauci's idea?

Posted by Ted Compton at 2:45 PM No comments:

Among other spectacles the same day, a handful of Republican lawmakers made a campy show of refusing to go through the newly installed metal detectors at the Capitol, which were made necessary by the armed insurrection that their last set of social media stunts had enabled. The ostensible purpose of the unnecessary display was to complain about the added security measures on Twitter and titillate the far right.

Finally we have something significant to obsess about

Yes, Neanderthals and humans had cave sex — but did they kiss?

One of the all-time great photo captions 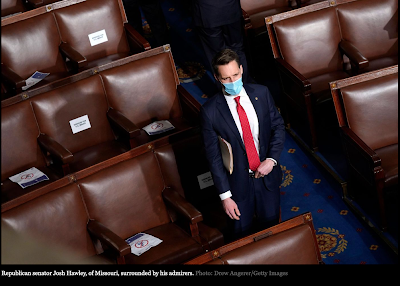 Posted by Ted Compton at 7:25 AM No comments:

When Donald Trump was improbably elected president in 2016, his eldest daughter, Ivanka Trump, and his son-in-law, Jared Kushner, were among the last people on earth one would consider qualified to work in the White House advising the leader of the free world.

They say journalists write the first draft of history so it's understandable a few errors creep in from time to time, mostly insignificant, one hopes. Like this one from yesterday's Los Angeles Times:

So many Guard members were dispatched to Washington, and so quickly, they were left to sleep on the domed building’s marble floors, a scene reminiscent of the Civil War.

You've probably seen the pictures by now (one's at the link).

But nope, these troops are not quartered on the Capitol floor. They're simply doing what all soldiers everywhere do, falling asleep in any position on any surface at any time they have a chance.

They're on break, or between assignments, or doing that other thing all soldiers everywhere do, waiting for orders from on high.

They look like they're pretty good at it, too.

Posted by Ted Compton at 9:14 AM No comments:

Facebook Has Been Showing Military Gear Ads Next To Insurrection Posts

Because Facebook is a highly personalized platform, it’s unclear which specific demographics have been targeted for tactical gear advertising. The company, which was expected to record $80 billion in revenue in 2020, typically does not disclose detailed targeting information for nonpolitical ads.

Posted by Ted Compton at 8:40 PM No comments:

Going forward (as the currently popular phrase has it)…

Road to a Second Impeachment

…we will be needing shorter committee names.

The data, obtained by a computer hacker through legal means ahead of Parler’s shutdown on Monday, offers a bird’s eye view of its users swarming the Capitol grounds after receiving encouragement from President Trump — and during a violent breach that sent lawmakers and Capitol Hill visitors scrambling amid gunshots and calls for their death. GPS coordinates taken from 618 Parler videos analyzed by Gizmodo has already been sought after by FBI as part of a sweeping nationwide search for potential suspects, at least 20 of whom are already in custody.

This behavior is starting to get annoying

Republicans Lash Out Against New Security Measures At The Capitol

The safety measures, which included metal detectors and physical pat-downs in some instances, were introduced in the wake of the deadly insurrection at the complex last week.

Posted by Ted Compton at 6:43 AM No comments:

See? We're not the only people with problems

One of the startled drivers is shown asking if he can at least take the bread after the ham has been seized, to which a customs official replies: "No, everything will be confiscated. Welcome to Brexit, sir. I'm sorry."

Although theirs do seem more civilized, somehow.

Posted by Ted Compton at 8:49 AM No comments:

At least we can count one good thing in 2021

That's it. It's over. It's really over. From today, Adobe Flash Player no longer works. We're free. We can just leave

The Photoshop giant promised Flash would die on January 12, 2021.

The demise of Flash will almost certainly lead to some link rot in our Work Avoidance Hall of Fame—which we will get around to looking into eventually—but it is for the best nonetheless.

Posted by Ted Compton at 7:14 AM No comments:

Avoid More Work With These Books

Movies With No Kissing